This performance of by TOiVO at the Old Time Fiddlers Gathering and Folk Arts Festival marked the beginning of a new era in the Festival's history, branching out to feature more traditional cultures and performances from the region.

The band TOiVO consists of Richard Koski, diatonic button accordion; Jason Koski, mandolin; Stefan Senders, banjo; Jim Reidy & Paul Martin, guitar; Harley Campbell, upright bass; and Annie Campbell, snare drum. Richard Koski, the leader of the band TOiVO has been playing Finnish-American folk music since 1970, mainly on diatonic button accordion, but also to a lesser extent on fiddle, harmonica, and piano. Richard has always lived in the Finnish-American community near Ithaca, NY, and since the 1940s has been exposed to the music in that community.  In 1910 Finns began moving to the southern Finger Lakes region around Spencer, Van Etten, Newfield, and Trumansburg, N.Y. to begin farming land that had been abandoned or neglected by previous owners. They established a vibrant community with their co-operative stores, churches, and political and social groups. By the 1950s and '60s, many of these groups were beginning to decline in membership and importance. In 1968 the Finger Lakes Finns was established as a social group to celebrate and promote local Finnish culture and activities. This group continues to be active up to the present with monthly meetings, traditional celebrations, concerts, lectures, newsletters, and scholarships, all with a Finnish flavor, but available and presented to all in the wider local community.

Richard Koski’s father played accordion at home and for local Finnish dances and events. He had a great memory of the old Finnish dance tunes that he grew up with. In 1970 Richard began playing with him, and over a period of 40 years learned about 100 of his old time Finnish tunes which he has played at many local and national Finnish-American dances and events and music festivals in Finland. In 2005 Richard was selected as the National Finlandia Foundation Performer of the Year, and in this role played many concerts all over the United States. Richard has taught Finnish-American dance tunes to his bandmates, first in the Crumtown Ramblers, and presently in his band, Toivo. He taught Finnish fiddle tunes to a local teenage Finnish-American boy, and they produced a homemade CD of some of their music. He has also taught Finnish tunes to his son, who plays mandolin in the Toivo band. In 2012 Richard was an instructor in diatonic button accordion at the Finnish Folk Music Camp at Finlandia University in Hancock, Michigan.

This performance of by TOiVO at the Old Time Fiddlers Gathering and Folk Arts Festival marked the beginning of a new era in the Festival's history, branching out to feature more traditional cultures and performances from the region. 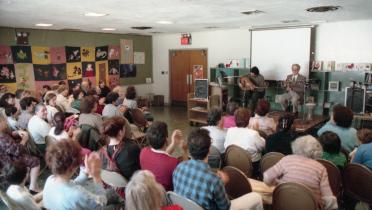