This program was the second year of a series called Brooklyn Folk Arts and Artists Series in order to "celebrate the beauty and tenacity of Brooklyn's varied traditional arts." The programs were presented through the Brooklyn Arts Council, previously known as BACA) and were a collaboration with the Brooklyn Public Library. The 1989 series of programs featured presentations of Lebanese and middle Eastern, Jewish, Chinese, Puerto Rican, and Afghan traditional arts in the Bay Ridge, Kings Highway, New Utrecht, Sunset Park, and Midwood Branches of the Brooklyn Public Library. In this performance, Simon Shaheen discusses the Oud and performs the Rahbani Brothers song "La Enta Habibi"  with Hanna Mirhige on darbuka and tambourine.

"Simon Shaheen, one of the finest oud and violin players performing today, is now a resident  of the Bay Ridge section of Brooklyn.  Shaheen is a mas­ter performer of a number  of Arabic classical and folk music styles found  throughout the Near East, and he is also a virtuoso  performer of Western classical music.  Because of the relative scarcity of Near Eastern traditional musicians in the United States,  and because many countries in this region share  the same musical and cultural  traditions, it

is common for artists such as Shaheen to cross cultural lines and perform together at the events of groups from a variety of Arabic countries. Shaheen was born in Tarshiha, a village in Galilee.  At the age of five he began studying oud with his father, Ilimket Shaheen, a noted per­former, composer and scholar, and at the age of seven began studies  in Western  classical violin at the Rubin Conservatory in Haifa.  Since coming to the United  States  in 1980, he has studied  West­ern classical music at the Manhattan School of Music and at Columbia  University, while contin­uing to perform and record Arabic music.  In Brooklyn, New York City, and throughout the United States, Canada and Europe, he has per­ formed  at community-based events, at concerts for broad audiences, and at lecture/demon­strations at major universities such as Princeton and Harvard. He has written  musical scores for three plays, and is now at work on a score for an American-Canadian film. Simon will be accompanied by Hanna Mirage, on darbuka (a Middle Eastern drum) and tambourine. A native of Jerusalem, Mirhige spent many years in Lebanon accompanying some of the finest  Middle Eastern artists in concert  and on radio.   He has performed at major concert  halls and festivals throughout the Middle East  and the U.S."   --Kathleen Condon 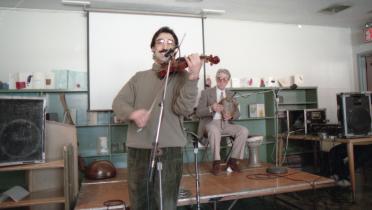