The video documents the creation of a Oaxacan sand painting by Antonio Cruz Zavaleta, for Dia de los Muertos/Day of the Dead celebration on November 1, 2019, held at the Orleans County YMCA, Medina NY.

Tapete de arena literally translates as “sand rug” or “sand mat,” and tapete is also commonly used in Mexico to describe woven mats of palm leaves. Known in English as sand paintings, these elaborate creations are an ongoing tradition in Oaxaca, Mexico, and abound in the capital city of Oaxaca during the annual Día de Muertos/Day of the Dead celebration, October 31-November 2. The tapetes link to pre-Hispanic customs surrounding death, in which imagery of portals between life and death aided the passage of a soul from the earthly world to the spiritual realm. With the arrival of European culture into Mexico in the 16th century, Christian friars sought to connect to indigenous beliefs in their conversion efforts, and rites of remembrance were eventually merged with the celebrations of All Saints and All Souls days, November 1 and 2. The tapetes, being made of earth, crushed brick, colored glass, sawdust, and sand, resonated with the Biblical phrase, “you are but dust, and to dust you shall return,” and images of the Jesus, the Virgin Mary, and other saints were incorporated. Today, tapetes use naturally and artificially colored sand, and can be further decorated with seeds, flowers, glass, beads, etc.

The tapetes remain an important funerary custom in some Oaxacan communities, notably Santa Cruz Xoxocatlán, Oaxaca. As described in an article from November 1, 2017 (see citation below), the community maintains a group of prayer leaders and singers, who also create the tapetes, for their own and neighboring communities’ funerals. As described by Christian Jiménez, a younger member of this group, a cross of the mineral, lime, is placed on the floor of the deceased’s home, onto which the coffin is laid for viewing, recalling Christ’s death on a cross. Once the coffin is removed to the cemetery, the lime cross is gathered up and saved. Then the artisan will create the sand painting on that spot. When it is done, they open up the area in the chest of the figure represented, and put the lime cross in that spot. Then it is covered over, and decorated with colors and sparkling white sand.

The tapete will remain in place for nine days (recalling the nine months we develop in the womb), during with a novena (9-day prayer cycle) is completed. Five padrinos, who are godparents and/or close family friends, decorate the tapete with flowers, representing the five areas of the cross: left arm, right arm, trunk, head and foot. The flowers are laid three days before the end of the novena representing the three days that Jesus laid in the tomb. Finally, the sand is gathered up and taken to the cemetery and scattered over the grave, with additional prayers.

A tapete can take from 5-7 hours or more to make, depending on the image the family has chosen and the size. For a woman who dies, the image references the Virgin and it is decorated with roses. In past times, the Virgin of Solitude/Loneliness (Virgen de Soledad), the patron saint of Oaxaca, was most often chosen. Currently the Virgin of Juquila is the most requested.  If it is a man who dies, the tapete is decorated with marigolds and the image will be Jesus or another saint. The sand is crafted in a nuanced, bas-relief sculpting style, using an extensive palette of dyed sand to create intricate shading and detail.

Christian relates that rezadores in his community don’t charge more than the cost of the materials, between 900-1000 pesos ($40.00-$50.00), because “if you have a gift, you have to share it.” He further says, “the role of the prayer leader is essential, because they come when a sick person is dying, to comfort and reconcile the family and help the sick person to die… Artistic talent is not as important as your faith, and the desire to support the community. The role is learned from a young age, with children watching and helping the master prayer leaders.”

Beyond individual funerary contexts, Tapetes de arena now feature prominently in the Day of the Dead festivities in Oaxaca city. Since 1996, the city has sponsored competitions of altars and tapetes in streets and plazas, with perhaps the largest being just inside the main cemetery. Participants range from traditional artisans to university art students and professional artists. The tapetes feature an array of imagery associated with the holiday, including religious iconography, skeletons, skulls, everyday life, natural flora and fauna, traditional and indigenous designs (weaving, pottery, woodworking, etc.), contemporary themes, and dedications to a specific individual, celebrity, or regional/national figure. The tapetes are, at the same time, a tribute, but also a welcoming of souls who are believed to return during the several days of the annual celebration, to briefly rejoin and commune with the living.

Antonio tells us more about sand paintings, and what he created for the Day of the Dead in Medina on November 1, 2019:

Sand painting is a painting that goes in front of the altar, traditionally. It is very elaborate. In most of the cases, it is the picture of a saint who was basically the saint of the person who died. So today when I came, I was trying to find out what saint I would do. But just before I started painting, one of the men working here on the altar, said ‘Why don’t you just do this, a cross, a simple cross.’  I never have done a cross because I’m an atheist. But the painting is not for me, it’s for them. So, I decided to do the cross for him, so I did.

It is a tradition in Oaxaca. I was born in Oaxaca and I studied art in Oaxaca…In doing art and going to other countries, one thing that is requested very often is altars, and with the altar comes the painting. So, when I started doing the altars here in the U.S., I always included a painting just because it goes with it, that’s the way it is done in Oaxaca, and I wanted to try to keep things the way they are in Oaxaca. 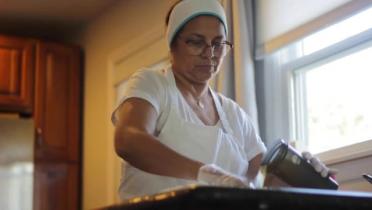