Elida Sanabria Aranda prepares chipa, a traditional Paraguayan snack, in preparation for a visit from the Virgen of Caacupé and the reciting of the rosary, conducted by the Comisión Virgen de Caacupé Westchester, NY.

Nearly a fourth of all Paraguayans live outside Paraguay. Westchester County is home to one of the largest Paraguayan communities in the United States—with the highest concentrations in White Plains, Harrison, and Mamaroneck. Other large Paraguayan populations in the USA are concentrated in Queens, NY, Somerset County, NJ, Miami-Dade County, FL, and Montgomery County, MD. Although the first documented Paraguayans living in the US arrived in the mid-1800s, larger waves of immigrants began to arrive in the 1940s. Immigration to the US peaked in the late-1970s as economic opportunities in Paraguay shrank causing many young Paraguayans to seek better education, job training and professional opportunities abroad. Many Paraguayan-Americans have found employment in the service industry, particularly in home cleaning and hotel housekeeping, and agricultural employment, as well as in a variety of professional services.

The story of the Virgen of Caacupé dates from the 16th Century. Indio Jose, a Guarani Indian and local sculptor was chosen by the Franciscan mission of Tobati to carve a statue of the Blessed Mother. While searching the forest for an appropriate piece of wood to carve, he found himself surrounded by a local tribe, the Mbayo, that was hostile to Christianity and opposed the Guarani conversions. Jose hid in the hollow of a tree and asked for the protection of his mother in heaven to protect him, promising that if he survived, he would carve an image of her. The hostile tribe passed him by, without discovering his hiding place. He then cut down the tree in which he had been hiding, and carved two statues. One he kept gave to the mission Tobati and the other he kept for his personal devotion. In 1603, a flood wiped out the entire area where Jose lived, destroying everything, including his house. As the waters receded, the statue of Our Lady miraculously reappeared floating on a lake, undestroyed. The locals recognized this as a sign of Mary’s presence, and began venerating the statue as “Our Lady of the Miracles of Caacupé.” Today, the Virgin of Caacupé is a model for all Paraguayan women and mothers.

The first statue of the Virgen was brought to the United States in 1993 by president Wasmosy and his delegates to Westchester County. Since then, Paraguayan communities across the country have sent for statues, that are made specifically and secretly by nuns in Caacupé, Paraguay.  Paraguayans from Westchester, Long Island, NJ, Bridgeport, and all around the country commune every year to celebrate their Virgen, who is worshiped in an annual feast every December 8. In the months leading up to the annual feast, the Virgen visits the homes of local-area families, where she resides for days on end, bringing her miracles and blessings to the household. In this video, we see the Virgin of Caacupé arriving at the home of Elida Aranda Sanabria, where she is welcomed by members of the Comisión Virgen de Caacupé , who recite the rosary and sing songs in Spanish and Guarani in her honor. A small feast of traditional Paraguayan foods, beverages, and snacks, including chipa, is enjoyed by all at the conclusion of the ritual. 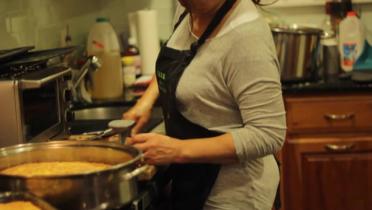