The Chankas of Perú carry on the legendary danza de las tijeras (scissors dance), an ancient, highly acrobatic indigenous ritual dance from the southern Andes of Perú. This dance survived colonialism, repression by the Catholic Church, and the dislocations of transnational migration to become a powerful symbol of the perseverance of Andean traditions in the modern world, recognized by UNESCO in 2010 as an expression of the “Intangible Cultural Heritage of Humanity.”

The name “scissors dance” refers to a pair of polished iron rods resembling scissors blades that are held in the dancer’s right hand and provide a percussive accompaniment to the intricate and acrobatic steps. Performing in dazzling, carnivalesque embroidered outfits, scissors dancers (called danzaq in the Quechua language) are ritual specialists whose traditional role was to bring balance to their community by mediating between the human, natural, and spiritual worlds. Because the spirits addressed included the underworld deity, Spanish colonial authorities unsuccessfully attempted to suppress the scissors dance as a form of devil worship. For residents of the Chankas’ region, however, the danzaq, who come primarily from a hereditary class of professional performers, have always been a source of pride. Throughout the dry season in the Andean agricultural calendar, competitions called atipanakuy bring scattered villages together in celebration. A cuadrilla (team) consisting of a dancer accompanied by a violinist and harpist represents each village, and two or more cuadrillas face each other in a symbolic duel involving a rigorous series of difficult dances that may last up to 10 hours. Although each dance has a narrative arc, a repertoire of traditional movements, and a larger ritual purpose, the combination of steps is largely improvised by the danzaq in order to demonstrate superior skill and bring honor to his village.

As Perú transformed into a mostly urban society, the scissors dance also took root in migrant communities in the cities of Lima. Dancer Walter Velille learned the tradition from his father while growing up in Lima, and travelled the world performing before settling in Port Chester, New York, in 2005. There, in the large Peruvian community of Westchester County, he and fellow dancer Luis Aguilar formed The Chankas of Perú. The other members of this celebrated cuadrilla are brothers Alejandro and Ignacio Velasquez, playing harp and fiddle respectively. Together these astounding performers continue the tradition of the scissors dance, which has transcended stigmatization and dislocation to become a potent—and profoundly inspiring—symbol of Andean culture. 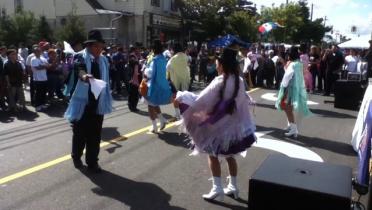