Asalbegim Mamadalibekova sings a traditional Wakhi lullaby (or lalajik). In the second video, she discusses the lullaby's wider significance in the community

With approximately 40,000 speakers worldwide, Wakhi is a language of the Pamir mountains, spoken by small populations similar in size–all under 10,000–in adjacent, remote regions of Tajikistan, Pakistan, Afghanistan, and China. The Wakhi area in Afghanistan is primarily in the Wakhan Corridor; in Pakistan, it is the northernmost part of the Gilgit-Baltistan region; in China, it is the southwest corner of Xinjiang Province; in Tajikistan, it is part of Gorno-Badakhshan. Wakhi is usually classified as a Pamir language within the Southeastern Iranian branch of the Indo-European language family, and there can be significant variation among the estimated seven Wakhi dialects -- including several within the Wakhan area of Tajikistan (represented here) alone. Wakhis in Tajikistan are highly mulitlingual, with Tajik serving as the national language, Russian a secondary lingua franca and a language of higher education, and Shughni plays a role as a lingua franca in the region of Gorno-Badakhshan. Outside migration into the Pamirs and the disruptive effects of Tajikistan’s civil war represent threats to the language. The diversity of writing systems reflects the four different countries where Wakhi speakers live, with the Cyrillic system used only in Tajikistan, for instance.

This performed lalajik represents the work of an accomplished master, a singer who is leading the revival of traditional singing in the Wakhan area. It was recorded as part of fieldwork in the Pamir in the summer of 2018, supported in part by the National Geographic Society. 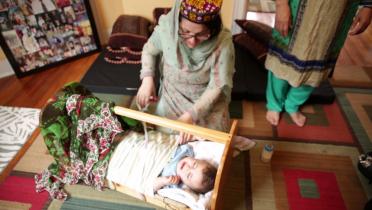