At home in Brooklyn, thousands of miles from the Hunza Valley of northern Pakistan, Amina Bibi passes on the Wakhi language to her 1-year-old son Alhan - through lullabies. In Wakhi with Wakhi and English subtitles by Husniya Khujamyorova. Part of the Lullabies of New York Project, supported by the Brooklyn Arts Council.

In the second video, Jamila Bibi, a Wakhi speaker from the Gojal Valley in the Hunza District of northern Pakistan, tells the story of her family and her language. In Wakhi with Wakhi and English subtitles by Husniya Khujamyorova.

With approximately 40,000 speakers worldwide, Wakhi is a language of the Pamir mountains, spoken by small populations similar in size–all under 10,000–in adjacent, remote regions of Tajikistan, Pakistan, Afghanistan, and China. The Wakhi area in Afghanistan is primarily in the Wakhan Corridor; in Pakistan, it is the northernmost part of the Gilgit-Baltistan region; in China, it is the southwest corner of Xinjiang Province; in Tajikistan, it is part of Gorno-Badakhshan. Wakhi is usually classified as a Pamir language within the Southeastern Iranian branch of the Indo-European language family, and there can be significant variation among the estimated seven Wakhi dialects. Within the Gojali dialect represented here, for instance, there is variation by village and region. Although Wakhi remains a vital language, still learned by community members of all ages, use of the language may be declining in areas where the Wakhi are a minority. In Pakistan, Wakhi speakers now typically also speak Urdu and English and may have contact with speakers of Burushaski and Shina. Traditionally the language has not been written, with Persian serving as a “high culture” written standard in the region. In recent years, activists and researchers working to preserve and write the language have developed Wakhi orthographies using Arabic, Cyrillic, and Roman letters. Most Wakhi speakers in New York (five or six families) are from Pakistan, but there is a larger Wakhi diaspora in cities such as Moscow and Karachi.

This lalajik video, filmed in the family home and very popular in the wider Wakhi diaspora, documents a rare case of intergenerational transmission, between three generations, in the setting of New York City. 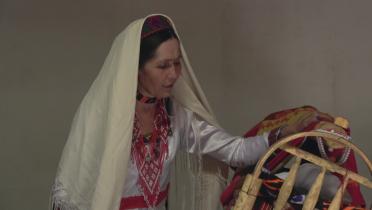