Ebru is the traditional Turkish art of paper marbling: floating paints on water and using different tools to create designs, which are then transferred to paper by 'skimming' the surface.

There is a significant amount of preparation work and mixing of materials that goes into ebru: both in the preparation of the water on which the paint will float, and the mixing of the paints themselves.

Distilled water is mixed with kitre (gum tragacanth) or carrageenan, which makes the water more dense allowing paint to float on top rather than sink to the bottom: this mixture can take anywhere from six hours to a full day to combine properly. This mixture is either mixed in a separate tub and poured into the tekne (metal tray), or mixed in the flat-sided metal tray itself. Paints are created by mixing the natural, ground pigment color with distilled water and öd (ox-gall), in a kavanoz (glass jar).

Paint is added to the ebru tray in a few different ways: by tapping a fırça (rosewood & horse-tail hair brush) against the figner, the chosen paint is sprinkled or spread across the surface of the water, creating the basic, beginning design to almost every ebru: battal (stone spread). For more precision the artist might use a damlalık (dropper) or a bız (metal pin) dipped in the paint.

Designs in ebru may be made using different tools to pull the paint across the surface of the water in different directions. In addition to the bız (metal pin), an artist might use a tarak (metal comb) to create a wavy design. The order in which paints are added - or the different order of designs if multiple are used, all play a role in how the finished ebru work will look.

İpek learned to make ebru from her father, Musa, and has been practicing ebru for nearly as old as she can remember. Although çiçekli (flower) patterns in ebru are popular, İpek followers in her father's preference for focusing more on the traditional abstract and geometric patterns.  One of the more advanced techniques Ipek uses is a method for skimming the paper that creates a rippled, wave appearance of 'fabric' (on a flat paper).

This photo was taken in advance of an ebru workshop co-organized and led by İpek, as an introduction to the exhibit she had co-curated in the Spring of 2017 of her family's ebru at the Castellani Art Museum. 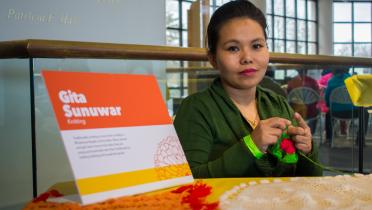