Currently, an "Extempo King" is crowned each year as part of the carnival in Trinidad. Three-time Extempo King Black Sage (Phillip Murray) has performed in New York a number of times along with other calypso masters including Mighty Gypsy (Winston Peters). In this scene, filmed at the Tropical Paradise, a Trinidadian restaurant in Brooklyn, Black Sage duels against a relative newcomer to the scene, Fat Man George. These picong performances preserve an important part of Afro-Caribbean culture and heritage.

Calypso, a style of Afro-Caribbean music, originated in Trinidad sometime around the turn of the 20th century. The roots of the Calypso can be traced to the arrival of African slaves who, being forbidden to speak among themselves, used music and song to communicate. Picong or extempo, is a light comical banter, usually at someone else's expense. As part of the Trinidadian Calypso tradition, it is the way in which West Indians (particularly those in the Eastern Caribbean) tease, heckle and mock each other usually in a friendly manner. However, the line between humor and insult is thin and constantly shifting, and at times the convivial spirit may degenerate into more heated debate. The ability to engage in picong without crossing over into insult is highly valued in the culture of calypso music. 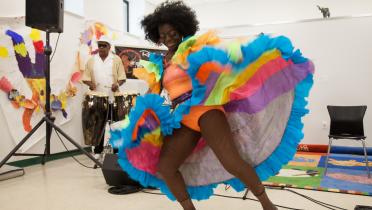