This rich selection of traditional spirituals performed by the Rev. Gayle Heyward and the LOIS AUGUSTA MOSLEY (LAM) INSPIRATIONAL CHOIR was filmed and recorded as part of Rhythm & Work in the African Diaspora, a concert of Talking Drums: Extending the Social Life of Traditional Drumming produced by Staten Island Arts Folklife. Rhythm and Work in the African Diaspora was presented on Saturday June 4, 2016 at the Staten Island Arts' Culture Lounge (located inside the St. George Ferry Terminal) from 2:00-4:00 pm. Since this time Staten Island Arts relocated to the Stapleton neighborhood of Staten Island.   This musical program was focused on the call and response found in song, drumming, and work traditions of the African Diaspora. It explored, among other topics, African-American spirituals that relate to the continuity of African drumming aesthetics (as can be seen in the breakdown towards to end of “Swing Low Sweet Chariot.”   The LAM Inspirational Choir led by Rev. Gayle Heyward is integrally connected to the current activities of the Sandy Ground Historical Society, Museum and community on Staten Island. Sandy Ground is one of the oldest continuously inhabited free Black settlements in the United States and the LAM choir performs regularly for church services and cultural programs across the tri-state area.    (Taken from NYC-ARTS-The Complete Guide)  Sandy Ground was settled in 1833 by African-American oystermen fleeing the restrictive industry laws of Maryland. Located at Bloomingdale Road, between Rossville and Charleston, it became the first free black community in New York. Originally known as Harrisville and later renamed Little Africa, Sandy Ground received its current designation for the poor quality of soil in the area. The area was also a junction on the Underground Railroad with the Zion African Methodist Episcopal Church, built in 1850, used as a central meeting place. Residents of the area were known to have large plots of land and prided themselves on their industry and self-sufficiency. Relations with local white neighbors, though not intimate, were for the most part cordial. As the oyster beds became overworked, many people turned to well digging, iron working, blacksmithing and being midwives. With the central economy eroding, many other families chose to leave the island entirely. In 1964 a fire destroyed many of the old buildings on the site, although several historic sites were fortunately spared: a 17th-century private school; the home of William Pedro, who died in 1988 at the age of 106; and the Bishop Forge, the last private blacksmith shop in New York, still remain. Preservation and study of the site are important since it may contain the only intact 18th -century African cemetery in America.  The society has run a museum on the site for more than ten years that retains the largest documentary collection of African-American culture and history on Staten Island. The museum preserves material related to the historic town, as well as letters, photographs, film, art, rare books, quilts and other archaeological artifacts. Highlights include a rare surviving can of Tettersalve, a beauty product manufactured by legendary Harlem businesswoman Madame C. J. Walker, and a letter from W. E. B. DuBois. The museum also sponsors arts-and-crafts sessions, a musical heritage series, a lecture series in Staten Island schools and churches, and a national traveling lecture series. There are ongoing quilting workshops in the African-American quilt-making tradition. The museum is an educational research facility chartered by the New York State Department of Education.

My family connects to Sandy Ground. My mother and grandmother you know, they are a direct link to Sandy Ground on Staten Island. And I as a reverend, through the music like to keep that going. This is our way of keeping the legacy alive. We have had several incarnations of this choir but I always try to keep these girls singing. We love to participate and share these songs that are so spiritual. I think singing is innately spiritual, especially in an African American context. Our music comes from the Church. Of course we link to other things too, other traditions from Africa, the motherland, and other influences. But making music for us historically, has been innately spiritual. And so today we sing these spirituals and we always have fun." —Rev. Gayle Heyward in a conversation with Naomi Sturm on June 4, 2016 on Staten Island. 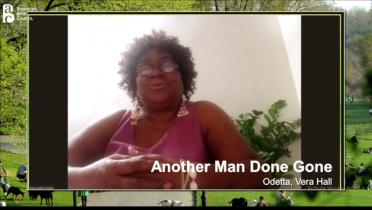