Introduction to Port Richmond through traditional arts of Mexico

Staten Island’s Latino population is growing rapidly, and Port Richmond is at the center of all its activity. According to the 2005-2007 American Community Survey, Staten Island is unique among New York's five boroughs in that the Latino population increased at a pace that mirrors the national rate, at 3.5 percent. In the past two decades, this community has revitalized Port Richmond with small businesses, restaurants, bodegas, and cultural events and activities. In recent years, with the economic downturn, national preoccupation on immigration, and new immigrants moving into established neighborhoods, racial tension and conflict have overshadowed the surge of Latino culture. When we filmed this tour in summer 2010, Port Richmond was mourning a spate of hate crimes that targeted Mexicans. The streets were lined with police watchtowers, patrol cars at every corner, policemen on horseback, and news vans with satellite dishes. As politicians discussed racism and hate crime task forces were organized, Jesus Cabrera was talking to us about the beauty and dignity of the Latino community. He talked about being united together, about children learning traditional Mexican dances, and about the role of the church. He brought us to a chapel, a bakery, a church parking lot, and a park. He filled each location with stories of community activity, cultural celebrations, and of people helping each other. 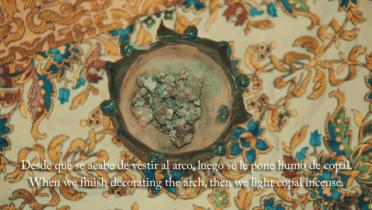