Photograph of mural installation by Erwin Printup Jr., for an exhibit on Haudenosaunee beadwork at the Castellani Art Museum in Spring 2016

This mural installation by Erwin Printup Jr. accompanied the Made of Thunder, Made of Glass II: Continuing Traditions in Northeastern Indian Beadwork exhibit at the Castellani Art Museum, which was open from February 7 to June 26, 2016. The murals (three in total) installed in the exhibit incorporate traditional symbols from two Haudenosaunee (Iroquois) stories: Skywoman (creation story) and the Grapevine legend. In addition to providing visitors with an introduction to traditional Haudenosaunee designs, the 'visual storytelling' of the murals also helped encode the space and share the stories' message with community members.

The idea for designing a mural came through discussions with Erwin Printup Jr., the artist who designed and installed them, Bryan Printup, a beadworker featured in the exhibit, and Gerry Biron, a beadwork historian, collector, and artist. In an early discussion for ways to better design the space to be more culturally meaningful, Bryan brought up the Creation story installation near the stairwell of the Iroquois Indian Museum. While we could not have the same 'vertical' dimension to the installation, we brainstormed ways to incorporate the 2D exhibit layout into the 3D vertical-dimension of the story.

With that idea in mind, we then turned to Erwin as we knew Erwin's work often drew from legends which he learned from other storytellers, teachers, and local researchers on Tuscarora Reservation. Erwin continued to amend and adapt his original drafts throughout the installation of the temporary murals (made of a mixture of electrical and vinyl tape). Below are the legends as (re)told by Erwin, and the main symbols used in creating the murals to tell the traditional stories visually.

Erwin Printup Jr. is a Cayuga, Bear Clan artist from Tuscarora Reservation, whose illustrations often draw on traditional Haudenosaunee legends and symbols. Erwin was the illustrator for Chief Jake Swamp’s book, "Giving Thanks: A Native American Good Morning Message", and his work is featured in the Tuscarora exhibit at the New York Power Vista and the Tuscarora Nation House. Three generations of Erwin's family - his mother, daughter, and niece - are beadworkers featured in the exhibit.

“...a group of people (were) travelling, and they came upon a great river. Along the banks were lined all different plants…and they needed to cross it. One person couldn’t go across it on their own, so they joined hands, and as they went along they wove this vine to hold onto. They got to the other side almost, but the river current was too much in the middle and the line broke. The people on one side went one way and the people on the other went the other way…that’s sort of how the Tuscarora separated from the rest of the Iroquois.”

The grapevine mural is framed by the two figures united by the yet-unbroken vine over a raging river current. The abstract design of the figures is a traditional representation found throughout Haudenosaunee material culture, perhaps most notably on wampum treaty belts. Geometric designs underneath the scene draw on early Iroquois pottery patterns to represent a shared foundation in Mother Earth for all the visitors to the exhibit. 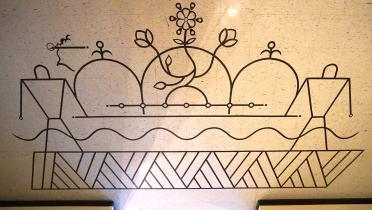