Marty Morris, who is the center of the cider-pressing event that he and his friends and family have been carrying on for over thirty years.  Marty first learned to press cider from an old man who pressed apples near Letchworth State Park:

“An old man had a cider press a long time ago, and he showed me how to do it, and we liked to drink hard cider so [….] He was an old guy, 80 years old.  All those old guys that grew up there in the Depression made hard cider. He always did it.”

Marty bought the press from him, and it has continued to function, making cider for his family and friends for the past thirty years.  This old press has also provided a model for other presses friends have built after its design.  Marty used to use a hydraulic jack, but found that the pressing wore the jack out over time, and switched to a manually turned house jack, set in the wooden frame.

MK: You've been doing this for 30 years

MK: And how did you get started

DR: Well Marty.  He got this press given to him, this really old press back in the day.  Like in the 70s.  So then we just always used it.  He knew how to make it. And of course we are in an area where there are a ton of apples.  So we've just always done it

MK: Was it something you did growing up too

MK: Just when you moved here?

DR: Just when we moved here and he had a cider press

MK: Where did he get it?

DR: Nunda, over in Allegany county, by Geneseo, that neck of the woods.  An old timer had given it to him, or maybe he bought it.  But since then, we've had so many cider parties, that we've had two or three people that have made presses, taking all the dimensions and information from this press.  Maria Kempler, who has the Hammerstone School for Women - she just did a big pressing and made her press after using this press.  I feel like it is the grandfather of all the presses around here.

MK: Where do you get most of your apples from?

DR: Everybody brings them.  Every year is different

MK: Are they trees in people's back yards?

DR: I think a lot of them - the first pressing we did today - my daughter Emma and granddaughter, we went into Hector, on Potomac road, and we went onto the cow pastures and we picked the wild apples that were out there. And there are wild apples on this road. And all these are pretty much - none of these are orchard apples.  They are all just wild apples.

MK: And do you go back to the same spots every year? Do you have trees that are like your trees?

DR: Yes we do.  And then of course we have friends who have orchards, like planted orchards. They are not for production. But we can go and pick on them.  So we do those every year. Like the same ones the ones in the neighborhood

MK: And the wild ones in the cow pastures, are they old?

DR: They are really old.  They are old varieties, they are old.  And the apples themselves are kind of small.  But a lot of them are like the older varieties that you don't see grown in people's orchards.  Like the Translucents - the old white ones.  They are delicious, they are tart.  They are very different that a lot of apples today.

MK: Do you know what kinds they are?

DR: Peter - the guy who was here - he is the variety guy.  I just taste them and go - this is a good one, it’s really good, it’s yummy.  It'll mix good with all the sweet ones.

MK: Do you know - were they on old homesteads?

DR: Some are for sure. And up here - I picked on this road and there's old foundations and stuff, so you can tell there was a house there at some point, absolutely. So they were planted, certainly a hundred years ago, probably.

MK: And are there other people you know around here who are doing this when you started

DR: Absolutely, yes.  Although now, in the last five years, it's kind of taken off, with the hard cider renaissance that is happening here. So more and more people are doing cider. And making their own hard cider, which is certainly happening here.

MK: Is most of the cider you make here to drink fresh, or do people ferment it too?

DR: It's probably half of the people here are going to have carboys and they are going to do hard cider and then all the half gallons are going to go in our freezers which will last me all winter.  And I won't have that many.  If I have like 10 gallons, that will be good till summer time. 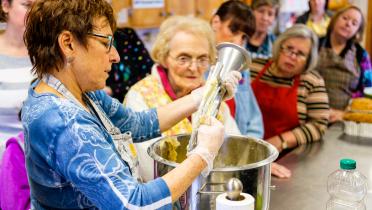 At The Jewish Table: Jewish Food and Culture in Elmira