This video is a segment of Bnat Houariyat, (the girls of Houara), an all women’s folklore group that plays genres named Chaabi and Houara under the leadership of Khadija el Ouarzazia.

This video is a segment of Bnat Houariyat, (the girls of Houara), an all women’s folklore group that plays genres named Chaabi and Houara under the leadership of Khadija el Ouarzazia. This takes place in a womens gathering in an open building (still in construction) in Moulay Brahim, Morocco, a small rural town in the El Haouz region that is about 45 minutes from Marrakech, It known for its traditional moussems, festivals/celebrations during times of the Muslim prophets birthday or when there is a calling to saints where everyone gathers at a zawiya, a place of prayer. In this video, the women are playing a Chaabi song - Chaabi is known as the “people’s” music of Morocco (chaab means people in Arabic). Its rhythms and lyrics are a main popular genre who’s rhythms are a crucial element of the Moroccan musical landscape for the “common person”.

Khadija el Ouarzazia, the group leader in a green and white kaftan, traditional Moroccan dress, all the way on the left closest to the screen, leads a song of Chaabi.When women play chaabi in this “roots” style with all percussion only, the women are often known as laabat, or “players”.The songs are call and response, as Khadija often does the lead call but sometimes bounces back and forth with other women as they take lead call sometimes. Chaabi music as a folkloric genre has now achieved mainstream status, now using synthesizers, guitars, drum sets, and violin - however Bnat Houariat chose to play it what they call “sec” - which means “straight up”.(drums only!) Similarily to Houara tradition, all the women musicians knows the lyrics of the music without rehearsal, but Khadija is the one who guides how accelerated the rhythms are, when there are musical breaks, and how the song ends. It is a structured improvisation given everyone knows the material for decades.

Khadija is playing a large bendir, frame drum, as the other women are playing a mix of taarija or in plural taarij (tube like hand drums with natural skin)and bendirs, Taarij are often used in the Houara tradition but laabat incorporate it in their chaabi rhythmic style.  The large taarija that is played on the lap is called a dohdoh in which one hits the drum with one hand and pulls her other hand in and out of the back of the drum to create an echo-like effect. All taarijas hold different rhythms and tones that create the buzz of the 6/8 polyrhythm of Chaabi. This song is a popular one named “Atih” (give it to him) which is a playful jam meant as a joke within women to “lay down the law” on their husbands if they dont treat them right! 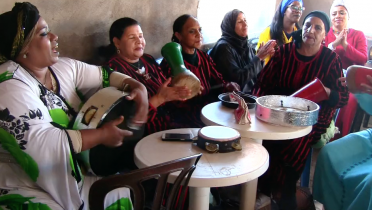