Eva Walker, a native of Suzhou, performs 山居吟 (Shan Ju Yin), in English: "Chant (Ode) to Living in the Mountain".

The 古琴 (gǔqín), is a seven-string instrument in the zither family from China, which has been played, performed, and written since Chinese history has been recorded. Throughout it's history, the gǔqín has been associated with scholars and the scholarly class, similar to other traditional Chinese arts such as 書法 (shūfǎ ; calligraphy) and 国画 (guóhuà ; brush painting). While the instrument is played across China, it is especially associated with the city of Suzhou and Jiangsu Province. Suzhou is home to the Lingering Garden, a UNESCO World Heritage Site, which has historically featured gǔqín music. Eva Walker, a native of Suzhou, learned the instrument from a few teachers in Suzhou, including Ye Mingpei and her daughter Jiang Fengwen. On resettling in Western New York, Eva has helped share the tradition of the gǔqín at a number of local schools and universities.

One of the things that surprised me most about the gǔqín, is that for a somewhat large instrument, it can get quite quiet. In fact, if it were not mic'd up, it would be hard to pick up all the subtle nuances of the instrument (such as a soft, sliding tone) over the chirping of the birds perched in the trees. Eva mentioned in her interview that playing the gǔqín is a form of self-entertainment and meditation, and it is not hard to see how it requires great contemplation and reflection to create each note.

In this video, Eva Walker describes the connection between the Guqin, nature, and the outdoors. 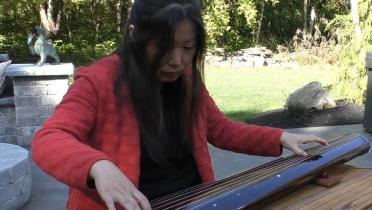